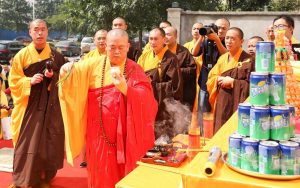 Illegal buildings around the Shaolin Temple have attracted public attention after local media reported that some temporary facilities were set up outside the temple and a construction site was established just 200 meters from the temple.

The abbot (Shi) said the Shaolin Temple did not construct those buildings. “If new buildings around Shaolin Temple were really needed, they must be approved by the authorities and built according to law so as to ensure that they are harmonious with Shaolin culture and Shaolin architectural style.”

The building being built near Shaolin Temple was a canteen of the Shaolin Temple Scenic Spot Administration Bureau. The construction had been suspended pending government approval, said a spokesman for the bureau.

Other illegal facilities would be torn down, he added.

“No unapproved buildings shall be allowed in the vicinity of Shaolin Temple,” said Guo Lei, head of the heritage preservation bureau of Zhengzhou City in central China’s Henan Province, which administers the Shaolin Temple scenic spot.

The Shaolin Temple, famous for Buddhist teaching and Chinese martial arts, was enlisted as world cultural heritage by UNESCO in 2010.

ABOVE : SHAOLIN MONKS DURING AN INTERNATIONAL EVENT

AFRICASIAEURO - Art collecting, Textile machines. There is much more to China than we generally assume. Our photography : https://aheneghana.photshelter.com/archives - https://instagram.com/africasiaeuro - -- we are : https://africasiaeuro.com/ -